You can burn 200 Calories of Coconut Milk with:

Percent Daily Values are based on a 2,000 Calorie diet. Your Daily Values may be higher or lower depending on your Calorie needs.

More Nutrition Facts
This pie chart shows the ratio of carbs to fat to protein in this food or drink. The percentages are based on the Calories that come from each of these macronutrients. The weight of each macronutrient, based on the serving size selected, is also provided. 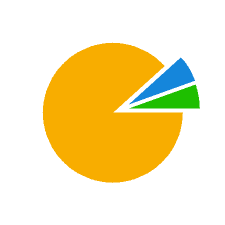 A food's caloric density reflects the number of Calories it has in 1 gram or 1 ounce. The lower the number the lower the Calorie density
Calorie density = 1.9
1.9 Calories in 1 ml of Coconut Milk
Coconut Extract, Water, Citric Acid (as antioxidant) Sodium Metabisulfite (as preservative).
About FAQ Contact Terms & Conditions Privacy Policy
Copyright © 2007 - 2022